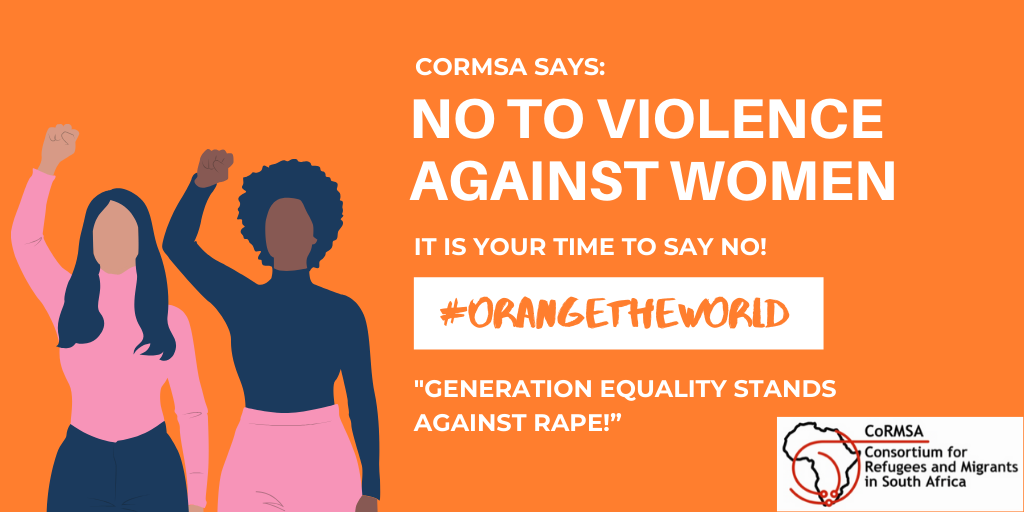 “CoRMSA Says No to violence against Women and Children”.

2019 Global Theme. #orangetheworld:  Uniting to end violence against women and girls on the move.

November 25this commemorated around the world as the International Day for Elimination of Violence against Women. Through resolution 54/134 passed in 1999, the United Nations General Assembly designated 25 November as a day to bring public awareness and collaborative intervention towards eliminating violence against women and girls. This resolution provides an opportunity to raise awareness and call attention to the urgent need to end violence against women and girls.   The 25thNovember also marks the start of 16 days of activism against Gender Based Violence leading up to International Human Rights Day –10 December.

The 2019 theme for International Day for the Elimination of Violence Against Women is ‘Orange the World: Generation Equality Stands Against Rape’.  This theme would not have come at better time when violence against women and girls has become one of the most widespread violations of human rights in South Africa and rest of the world. The 2013 World Health Organisations global study indicates that, 35 per cent of women worldwide have experienced either physical and/or sexual violence.  Similarly, asylum seekers, refugees, migrant women and girls face specific challenges and protection risks in transit as well as in host communities; these include physical harm and injury, exploitation and gender-based violence.  Available evidence indicates that, in South Africa, most migrant women cited gender-based or sexual violence as one of their top threats (Institute for Security Studies Report -2018).

Violence against all women and girls regardless of their nationality or documentation statuses has received international and local attention with statistics of gender based violence (GBV) in South Africa rapidly increasing, most recently resulting in local protests of Total Shutdown Movement in Sandton, Johannesburg and around the country. These campaigns make public the violence which is often silenced and stigmatized and provides space for all women to stand in solidarity and share their experiences of violence and theneed for effective legislative changes and enforcement of these to address the widespread issues.

On this day, the Consortium for Refugees and Migrants in South Africa (CoRMSA), recognises the plight of women and girls on the move. It is significant to note that asylum seeker, refugees and migrant women and girls experience violence as intersectional and multi-layered. Women in migration are particularly vulnerable during their transit to seek protection or a better life as they endure many forms of human rights abuses, both emotional and physical.  Reported incidences often include sexual violence, labour exploitation, xenophobia and discrimination. Women in migration face further violence and silencing, as they will often not report incidences of violence for fear of experiencing further victimisation and deportation as a result of their nationality and documentation status.